This article is originally published by BBC.

When the BBC launched the Loneliness Experiment on Valentine’s Day 2018 a staggering 55,000 people from around the world completed the survey, making it the largest study of loneliness yet. Claudia Hammond, who instigated the project, looks at the findings and spoke to three people about their experiences of loneliness.

“It’s like a void, a feeling of emptiness. If you have a good piece of news or a bad piece of news, it’s not having that person to tell about it. Lacking those people in your life can be really hard.”

Michelle Lloyd is 33 and lives in London. She is friendly and chatty and enjoys her job – she seems to have everything going for her, but she feels lonely. She has lived in a few different cities so her friends are spread around the country and tend to be busy with their children at weekends. She does go for drinks with colleagues after work, but tells me it’s the deeper relationships she misses.

“I’m very good at being chatty, I can talk to anyone, but that doesn’t mean I’m able to have those lasting relationships with people,” says Michelle. “You can be in a group and it can be intimidating because you’re conscious of not letting people get to know the ‘real you’.

“I would say I’ve always had an element of feeling lonely. Ever since I was a teenager, I’ve always felt a little bit different and separate from large groups of friends, but in the last five years it’s crept in more.”

Michelle has experienced anxiety and depression which she finds can amplify her loneliness because she finds it hard to articulate negative emotions.

“If I’m in a group I often find myself saying ‘I’m great’ when people ask how I am. It’s almost like an out-of-body experience because I can hear myself saying these positive things, when I’m thinking about how I struggled to get out bed yesterday. It’s the loneliness of knowing how you feel in your own head and never being able to tell people.”

There is a common stereotype that loneliness mainly strikes older, isolated people – and of course it can, and does. But the BBC survey found even higher levels of loneliness among younger people, and this pattern was the same in every country. 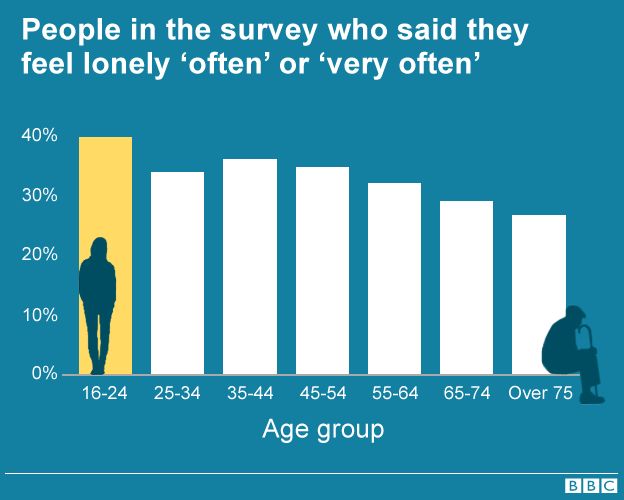 The survey was conducted online, which might have deterred some older people, or attracted people who feel lonely. But this is not the first study to see high rates of loneliness reported by young people: research conducted earlier in 2018 by the Office for National Statistics on paper as well as online with a smaller, but more representative sample also found more loneliness among the young.

It’s tempting to conclude that something about modern life is putting young people at a higher risk of loneliness, but when we asked older people in our survey about the loneliest times in their lives, they also said it was when they were young.

There are several reasons why younger people might feel lonelier. The years between 16 and 24 are often a time of transition where people move home, build their identities and try to find new friends.

Meanwhile, they’ve not had the chance to experience loneliness as something temporary, useful even, prompting us to find new friends or rekindle old friendships – 41% of people believe that loneliness can sometimes be a positive experience.

Michelle has been open about her loneliness and her mental health, even blogging about them. This is not something everyone feels they can do. The survey suggested that younger people felt more able to tell others about their loneliness than older people, but still many young people who feel lonely told us they felt ashamed about it. Were older people afraid to tell us how they really felt or had they found a way of coping?

In February 2018 The BBC Loneliness Experiment was launched on BBC Radio 4 in collaboration with Wellcome Collection. The online survey was created by three leading academics in the field of loneliness research.

But what the results do suggest is that loneliness matters at all ages.

When loneliness becomes chronic it can have a serious impact on both health and well-being. To try to pin down why some feel so lonely, we looked at the differences between people. Those who told us they always or often felt lonely had lower levels of trust in others.

The survey was a snapshot in time, so we can’t tell where this lack of trust in others came from, but there is some evidence from previous research that if people feel chronically lonely they can become more sensitive to rejection. Imagine you start a conversation with someone in a shop and they don’t respond – if you’re feeling desperately lonely, then you might feel rejected and wonder if it’s something about you.

Michelle recognises some of this in herself. “You become quite closed off. You are dealing with so many things alone that when people do take an interest you can be quite defensive sometimes. It can be incredibly debilitating being lonely.”

The relationship between loneliness and spending time alone is complex – 83% of people in our study said they like being on their own. A third did say that being alone makes them feel lonely and in some cases isolation is clearly at the root of their loneliness.

Jack King is 96 and lives alone in Eastbourne, on the south coast of England, after losing his wife in 2010. On his windowsill sits the tennis-ball-sized rock that hit him, leaving a hole in his forehead, when he spent more than three years as a Japanese POW during World War Two.

Today, he says, the days feel very long, but to distract himself from his loneliness he fills his time writing novels and poetry, playing music and painting.

Loneliness around the world

Both Jack and Michelle find weekends the hardest. Michelle would like to go out for brunch, but has no-one to go with.

“You can do these things on your own, but it’s not as fun, because you can’t try the other person’s food,” she says. “Nice weather makes it worse. You see people sitting outside laughing and joking and I think how I want to be part of that.

“If I stay in all weekend cabin fever will set in, so I take myself off to Oxford Street and spend money I don’t necessarily have. It’s not the most healthy or practical way of dealing with loneliness, but it’s about being around people and it’s great because you can lose yourself in the crowd.”

So what might help? We asked people which solutions to loneliness they had found helpful. At number one was distracting yourself by dedicating time to work, study or hobbies. Next was joining a social club, but this also appeared in the list of the top three unhelpful things that other people suggest. If you feel isolated then joining a club might help, but if you find it hard to trust people, you might still feel lonely in a crowd.

Number three was trying to change your thinking to make it more positive. This is easier said than done, but there are cognitive behavioural strategies which could help people to trust others. For example, if someone snubs you, you might assume it’s because they don’t like you, but if you ask yourself honestly what evidence you have for that, you might find there isn’t any. Instead you can learn to put forward alternative explanations – that they were tired or busy or preoccupied.

The next most common suggestions were to start a conversation with anyone, talk to friends and family about your feelings and to look for the good in every person you meet.

People told us the most unhelpful suggestion that other people make is to go on dates. Michelle says she does feel lonelier now she’s not in relationship, but knows that that meeting someone new wouldn’t solve everything. “It’s important to remember you can be lonely even when you’re in a relationship,” she says.

Jack still misses his late wife desperately. I asked him whether he would consider sharing a house so that he had company, but he says he’s too set in his ways. He wouldn’t want to move to a residential home with other older people because then he’d lack the space to paint and write. So, too frail to leave the house, he called the charity The Silver Line, who arranged for a volunteer to phone him every Sunday for a long chat. His three children live a couple of hours away, but they all phone frequently and he has someone who comes in for two hours on weekdays to help out. All of this makes a difference, he says, but he finds it still doesn’t give him the companionship he had previously.

“The weekend is a dismal time,” says Jack. “The time can drag. I don’t have any friends because all my friends are dead. All the ladies I loved are dead. At this age nearly everybody is dead – except me. I’m still here at 96-and-a-half.”

I asked Jack what he thinks the solutions are. “Do what you can do. If you’re mobile you can join a class or, if not, do something creative on your own. When you’re painting simple watercolours you are so intent on what you’re doing that you can’t think about anything else.”

Another of the solutions suggested in the survey was to start conversations with everyone you meet. Jack does that. “It’s a polite thing to do,” he says. “If you can find an interest that the other person has got, it’s a good way to start a conversation.”

Several organisations run projects to alleviate loneliness, but Michelle hasn’t yet found anywhere she would be comfortable attending.

“Where do you go to find friends if you’re 33?” she asks. “People say, ‘Get a dog.’ I would love it, but it’s not fair on the dog at this time in my life. Maybe exercise would be good – joining a yoga class maybe – or volunteering. I know how powerful that can be.”

But after blogging about her loneliness she might be finding her own solution, tailored to her interest in music. Lots of people have been getting in touch with her about going to gigs and she’s thinking about whether she could start some kind of social club in London for other young people who feel lonely and like music.

Michelle has also noticed that the small, kind things people do can help, and she tries to do the same herself. “On the way to work, someone smiling at you on the tube can make such a difference, especially if you’ve woken up feeling like the world is on your shoulders. I go and get coffee in the building where I work and the lady there is so lovely. That’s my first interaction of the day.

“It’s just being mindful that everyone is dealing with their own stuff, so be kind. Do tiny acts of kindness.”

Enable your people to take care of their issues and mental health challenges with confidence. Book a demo now or contact us to learn more about our Employee Assistance Program (EAP).

Career Money Life is a fresh, smart way of curating your future. A world’s first, Australian made online business, that uses community feedback to empower you to select from rigorously vetted experts to help you shape your next move. Purpose built to embrace individuality; it’s why we offer a holistic, inspired range of services in career development and transition, money management and health and wellbeing. Career Money Life unique…like you. View more posts